Many people I have known hate scorpions as pests or are afraid of them, fearing their sting. Anyone who has read my blog will understand that I am exactly the opposite. I can’t see a scorpion without running towards it and getting a closer look. Scorpions make decent pets, as long as you don’t mind having an animal that will not love you, care for you, or even tolerate your presence. I have a few such animals already, but if you feel the urge to handle your animals, stay away from scorpions (especially the more venomous varieties). You’ll see pictures of people handling pet scorpions, but this is risky for the animal as they can be badly hurt by a fall. Even a “safe” scorpion can cause a painful sting, so it’s best just to stay hands-off.

My scorpion terrarium will be made of a glass cookie jar with a lid. The species I plan to put in is the Arizona Stripe-Tailed Scorpion, which is not particularly dangerous (although it is quite painful). For a more dangerous animal, I would want a much tighter-fitting, latching lid, or possibly one with a locking mechanism.

After adding a layer of sand, I added hiding places in the form of cholla wood (a type of cactus) and small stones. It is important that the animal has a place to hide and feel secure. A piece of damp cotton in the back provides water without the risk of drowning. 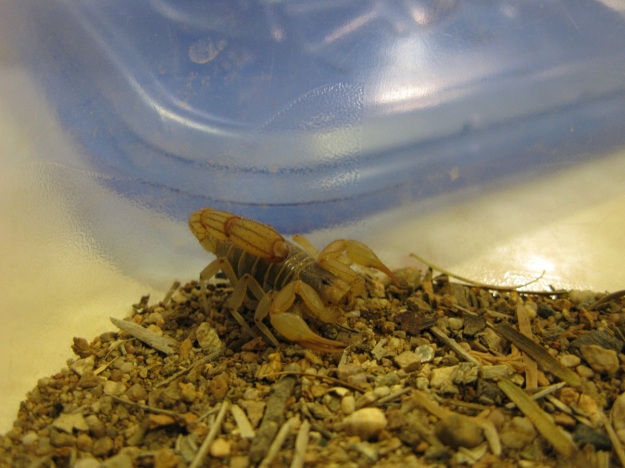 This is the scorpion that I will be using. Handle scorpions with a cup or with long forceps, being careful not to damage them. Even if you’re trying to get them out of the house, remember that they will do you a great service outside by eating insects.

As with rattlesnakes, most stings can be avoided by following two simple rules: Don’t place hands, feet, or any other body part where you have not looked first, and stay out of range of the sting of a scorpion once you know it’s there. Using long tools will achieve both of these.

This is where things get cool. Scorpions fluoresce under ultraviolet light. I bought a cheap UV flashlight and pointed it at the scorpion:

The picture shows the color nicely, but it doesn’t do justice to the intensity of the glow because I needed some background light to take the photo. They glow like little lights!

I CAREFULLY added the scorpion to the terrarium, where you can see how well the camouflage works against natural materials. Again, adding UV changes things:

The scorpion is no longer hidden from view. This is a standard method of locating scorpions for research or pest control. They sell UV lights at Lowe’s for this purpose. 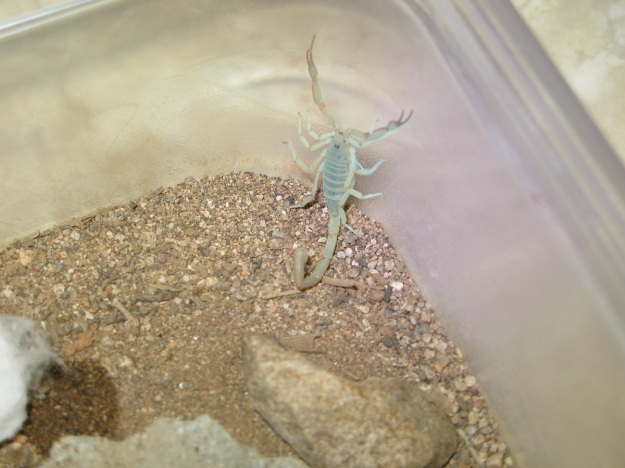 This is an Arizona bark scorpion, the most venomous scorpion we have here. Under normal light, it is a light tan colour, allowing it to blend in with its surroundings. Under a blacklight, it glows right up.

I think he looks like he’s dancing at a college party. In fact, he’s demonstrating how poorly he can climb on smooth surfaces. Regardless, he’s one cool arachnid.

2 thoughts on “Fun with Scorpions”