Hiking around the base of the Santa Catalina Mountains this morning, I experienced a real treat: my first wild Gila Monster. I was walking around, looking for bugs, when I heard scratching sounds coming from a bush to my right. I looked down, and saw a Gila Monster walking towards me. I stood still to let it pass, but it saw me and turned right around. 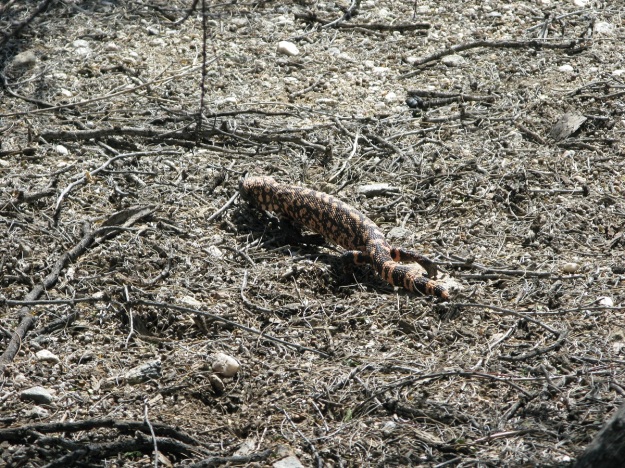 As he walked away, I snapped this photo. Not the highest quality, I admit, but I was hardly going to leave it at one shot.

The Gila Monster (Heloderma suspectum) is the largest lizard native to the United States. It can grow up to two feet long and weigh as much as five pounds! This one was much shorter at a bit over a foot long, but still an impressive animal.

Gila monsters are protected in Arizona, so I wanted to be careful not to disturb it. Instead, I decided to wait for it to settle down somewhere and then take pictures. Unfortunately for me, it crawled into the densest thorny brush around and settled there. 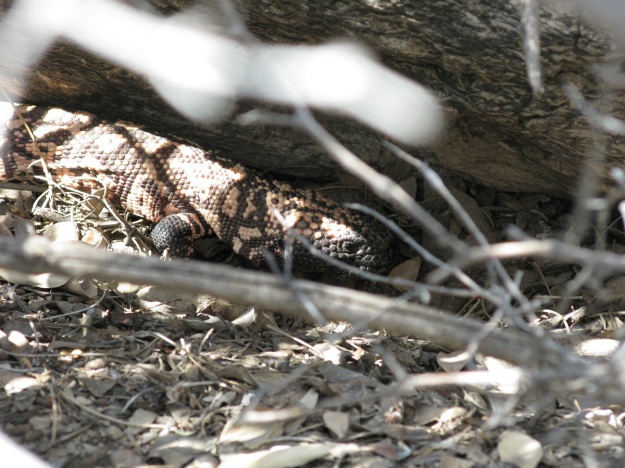 I didn’t want to get too close, again because the Gila Monster is protected, but also because they are well-known for their venomous bite. One of only two lizards with medically significant venom (the other is the closely related Mexican Beaded Lizard), people are often afraid of these animals. The truth is, they are slow and non-aggressive. At most, they can only walk as fast as 2 miles per hour, much slower than us. They can, however, swing around very quickly and bite if you try to handle them.

The venom is purely defensive, since the Gila monster eats mostly newborn rodents and bird eggs. It causes intense pain, and can result in a drop in blood pressure, but fatalities are almost unheard of. Regardless, I wanted to be careful so I kept several feet of distance between myself and the animal.

And here is the shot that made it all worth it: