I was going to get home late last night, because of an Aikido class, so I didn’t want to cook dinner after I got home. So, I found a recipe for sourdough pizza. This solved two problems for me. One: What’s for dinner? Two: What am I going to do with the cup of sourdough I discard during every feeding? It turned out quite good, although next time I’ll make it a bit thinner.

I found the recipe on the King Arthur Flour website. This is actually a very good resource for recipes, and they have a large section on sourdough. I made the dough in the morning, and let it rise while I was still home. Then I punched it down and put it in the fridge.

In the evening, I rolled it out and baked it part-way through. It sprang a bit in the oven, and turned somewhat thick and lumpy. Next time, I’ll roll it more, or even split the dough to make two pizzas. 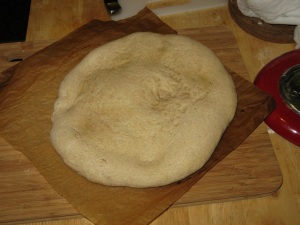 Then, I added Italian herbs, mozzarella, and pepperoni. I used a tomato sauce base

I then finished baking. It turned out delicious. The sourdough flavor is mild, because of the addition of a small amount of baker’s yeast, and the herbs complimented it nicely.

It took very little work once I got home to make this yummy, lumpy-looking pizza.

On another note, I’ve been playing with my food again. I tried making serpentine baguette today, and while it looks nice, I think it got a bit fat during the oven spring. I also tried stenciling with cacao powder, to get a dark image. I think it looks better than my flour stencil.